Despite the gaudiness and over-priced hotels of this man-made fantasyland, there’s quite a bit of gems to be found in this city.

Catching Vegas at its best, in photographs…

The Bellagio fountain.  Taken right after the sun went down and just before the transient bulbs of the city took over.  It was beautiful how the water danced in time with the song’s beat.

I like how Vegas contained the world inside a 4-mile long strip by making miniature replicas of famous world landmarks.  This is not as high as the original Eiffel Tower in Paris, but I still felt as small standing at its base.

such a happy billboard

A Triton guiding a seahorse in the replica of Rome’s Trevi fountain.  According to the legend, those who throw a coin into the (original) fountain will go back to Rome.  So far this legend hasn’t come true for me yet, but maybe another wish from this mini Trevi will make it happen.

the Strip was emptying as the last of the restless visitors settled down in the wee hours; this gondola was on its way to dock for the night

street performers: a staple appearance in all tourist places

fleeting clouds, the sun’s rays peeking through, a photo reminiscent of days gone by

taken from an overpass bridge

one of the many fountain statues on the Ceasar’s Palace compound; again reminiscent of Rome

a playful and colorful casino

I got this shot while waiting for the bus to the airport, right when the sun is working its way up those trees. 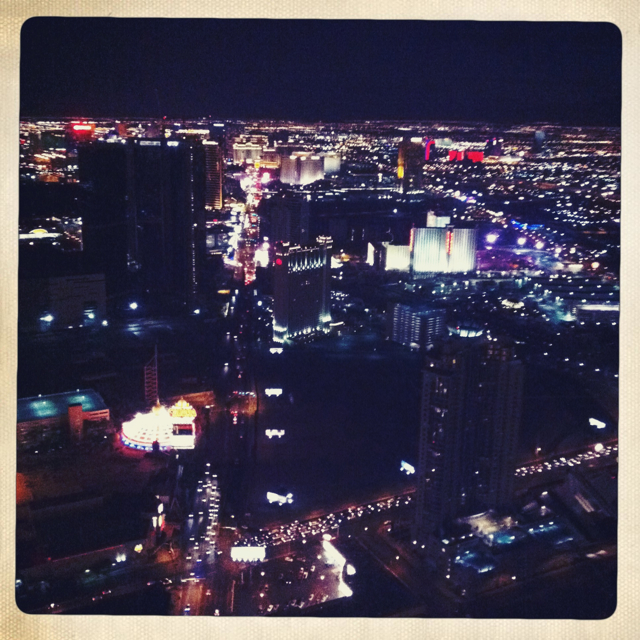 the lights of Vegas, taken from the Stratosphere