We are nearing the end of our trip as we drove to Maine’s largest island, Mt. Desert Island.  It is home to several towns, the largest of which is Bar Harbor, and the largest section of Acadia National Park.

Bar Harbor is chock-full of tourists, small restaurants and shops, motels and taverns, yachts and lobster boats, and just downright good ambiance that makes it a good base to explore the neighboring areas, by which I mean the Acadia National Park.

Before it was Acadia, it was established as Sieur de Monts National Monument in July 1916 by President Woodrow Wilson.  Then it achieved national park status in 1919 and became Lafayette National Park.  It was not until 1929 that it was officially named Acadia National Park.  Acadia is one of the most diverse national parks I have visited. Comprised of beautiful jagged coastline and granite mountains, ponds and evergreens, beaches and dozens of hiking trails, there’s something for everyone here.

To make the most of our visit, we followed the park’s Loop Road (represented by thick black lines on the map) which meanders through the coastline and the major sights of the park.  I was never a beach person but I figured it would be unacceptable to end a summer road trip without setting foot on a beach.  So I parked by Sand Beach, took off my flip-flops, and dipped my feet in its frigid Atlantic waters. There. Now I can say I went to a beach.

Back in the Loop Road we found a place to park the car and decided to walk along the coastline.  After all, it is difficult to fully appreciate the views through a car window.  We walked on the Ocean Path and paused briefly at the area dubbed the Thunder Hole.  An inlet naturally formed from the rocks, it creates a “clap” sound when the air inside the cave gets trapped by the next waves.  However, it was a calm and sunny day and the Thunder Hole remained silent as a clam.

The views along the Ocean Path were stunning.  After a while I stopped my futile attempts to capture them in photographs and contented myself to finding a rock to sit on and just take it all in with my eyes. 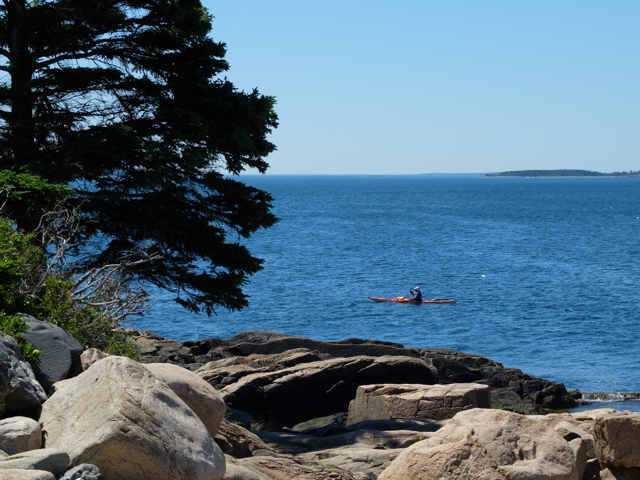 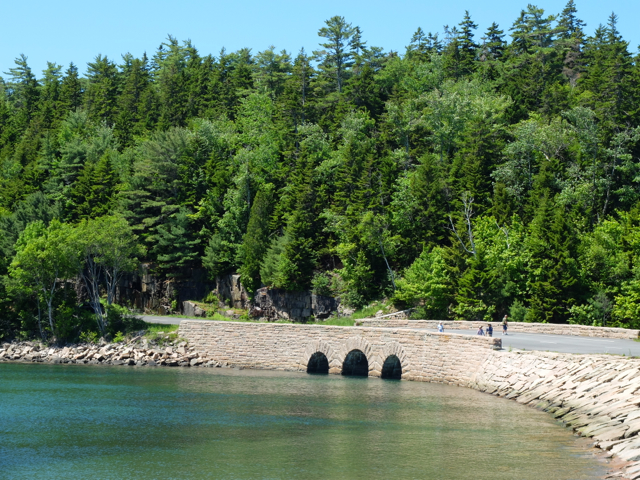 There’s only one full-service restaurant inside the park, the Jordan Pond House, and right on cue we arrived there around lunchtime.  So did most of the park’s visitors.  Good thing we packed lunch and we bypassed the line of people waiting for tables, found a bench behind the restaurant, and had our own picnic with views of the pond.

The Jordan Pond House continues the teahouse tradition of serving tea and popovers in their lawn and it felt like we’d be missing out on something if we didn’t partake.  So after a brief stroll around the pond we got a table and had a relaxing coffee break with their light, delicious popovers served with butter and strawberry jam.

Fully satiated we drove towards Cadillac Mountain.  It is said that the mountain is the first place to view sunrise in the United States from October 7 through March 6.  Another fact that Detroiters might find interesting: Cadillac Mountain was named after Antoine de la Mothe Cadillac, who later founded Detroit and was the inspiration behind the name of the Cadillac automobile.  The 3.5 miles Summit Road leads the way up to the top of the mountain.  Imagining a peak, I was surprised to reach the top and saw how “flat” it was.  Nevertheless, the view was incredible.

We headed back down to visit the last lighthouse of this trip: Bass Harbor Lighthouse.  Located in the southeast corner of Mt. Desert Island, we took a roundabout way to get to it due to traffic and road constructions.  To see the photogenic side of this lighthouse you have to walk down the trail behind it, traverse the rocks guarding it from below, and capture it from its cliff side. It was beautiful.  A fitting ending to an incredible road trip.