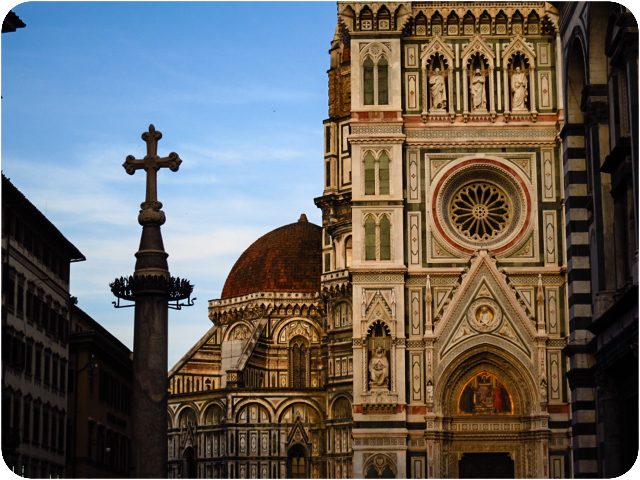 The gelato was said to have originated in Florence.

What’s the difference between a gelato and an ice cream, you may wonder?  Well, gelato is churned at a slower speed which makes it denser. It also contains less fat.  It tastes creamier somehow.  Though I’m not fond of ice cream, I couldn’t possibly leave Italy without partaking of this typical Italian refreshment. What better place to have it than where it was first created. 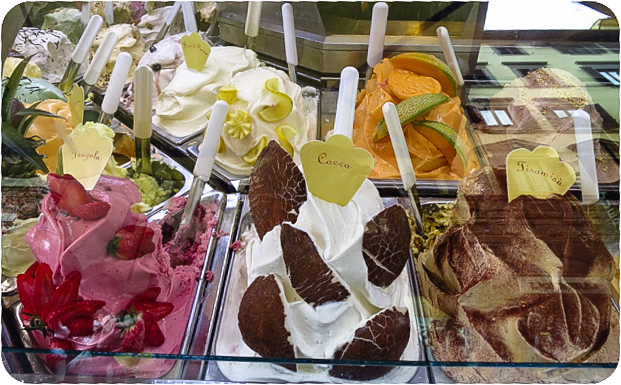 So gelato in hand, I set out to explore the big city of Florence.

Coming from Venice, Florence had the look and feel of a big, busy, modern city. It’s best to view it from above, where the terracotta roof tiles gave it a more antique look.

Florence has the most impressive cathedral I have ever laid my eyes on.  Considering all the places I’ve been, that’s a pretty lofty comment to make.  (Yes, more impressive than St. Peter’s in Rome.) What made it impressive was its size and location: its enormity was magnified by the smaller buildings close by.  I still remember catching my breath when I came around the corner and first laid my eyes on it.

I took dozens of pictures but none captured what I saw or felt: an enormous building that dwarfed everything else around it but without making the place feel cramped. And even though it was crowded, it felt like there was enough space for everyone.

Another iconic figure found in this city is the original statue of David by Michaelangelo.  I didn’t think one statue would amaze me but this one did. First thing that came to mind when I saw it: It was really, really tall.  17 feet tall to be exact. Then I noticed the accurate life-like detail of the statue.  Next I wonder: how can someone make this from a single piece of marble?  It was, without a doubt, a beautiful, perfect piece of art.

Plaza Signorina contains a very good replica of David.  It has many other Renaissance statues as well, including the Medici lions.

This is Ponte Vecchio. It is a covered bridge over the Arno River. It houses expensive jewelry shops and souvenir stores.  Historically, it was home to butcher shops but the Medici family kicked them out because of the smell.  The Vasari Corridor connects it to the Uffizi Gallery, Palazzo Pitti, and Palazzo Vecchio. The corridor was used by the Grand Duke Cosimo I de’ Medici to move freely between these buildings in private. 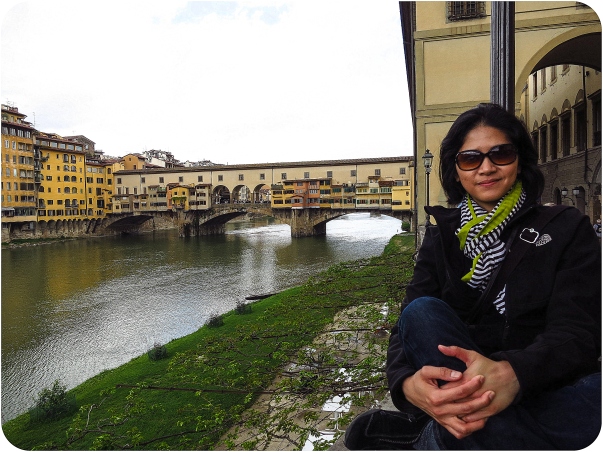 Pisa is only an hour train ride from Florence which makes it a perfect city to go for a day trip.  As my visit was on a Sunday, the city itself was quiet.  The Leaning Tower was amusing to see. But even more amusing was watching people do various poses in front of it. Everyone had their own way of keeping the tower from falling.

Completing the complex is the Cathedral and the Baptistry.  There’s a big lawn in front of the plaza; a perfect setting for a picnic on a nice day.

I wanted this view in my backyard:

Chianti, home of the Chianti Classico wine, is fairly close to Florence and is another perfect destination for a day trip. The bus ride to Greve in the Chianti region was a beautiful winding, narrow road that passed by small towns, lush vineyards and hills.  It was a local bus and it made a few stops along the way where locals boarded and got off.  When it was finally our stop a nice Italian lady was eager to show us around. Moments like this I was glad I learned Italian before this trip.

The purpose of this trip was of course, wine tasting.  The wine tasting cantina was self-serve: one buys a card and loads it with money, then inserts this card into one of the dozens of wine barrels to taste.  Pretty nifty I thought. And quite fun.  I enjoyed a variety of Chianti wines along with some meat and cheese hors d’oeuvre.

I love prosciutto crudo (dry-cured ham) and I was thrilled to find this huge Salumeria (cured meat shop) nearby.

Though I was a little shocked when I saw this: 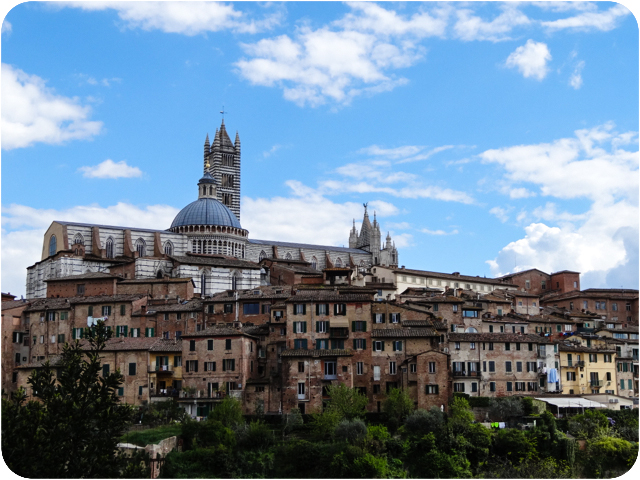 After 4 days in the bustling city of Florence I went to quiet Siena for a couple of days to relax. Siena is timeless. It retained its medieval cityscape which gave it a quaint characteristic that I loved.

It is set on a hill and walking up and down its sloping streets can be a test of endurance sometimes.

The Campo is one of my favorite squares. The Palio di Siena (horse-race) is held here twice a year. On a nice day one will see people sitting or laying down on the square’s sloping floors, having a picnic, or just hanging out with friends.

Siena also has one of the most beautiful cathedrals I have ever seen.

Built in Romanesque-Gothic style, the alternating stripes of green-black and white marble gave it a contrasting look of austerity and softness that was surprisingly pleasing to the eye. The spires made the whole structure look even taller. I loved the detailed work on the façade, simply incredible.

Inside was just as stunning: the black and white marble stripes on the tall, wide columns and on the walls draw the eye upwards and around the entire cathedral.  The entire floor was covered in marble mosaics, with huge swaths depicting scenes from the Bible and Siena’s history.

I grew quite fond of Tuscany. I’m already thinking of coming back and spending more time to fully explore this lovely region. 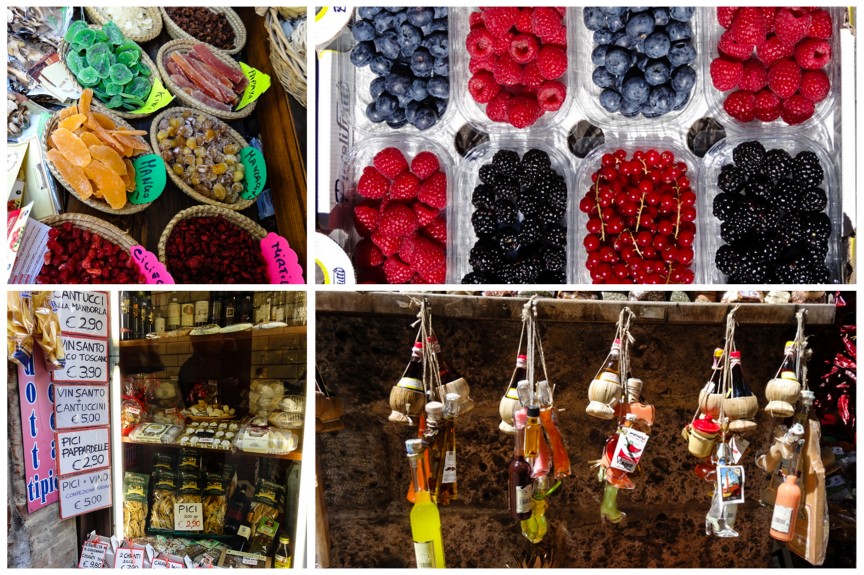